The Office of Darkness—Officium Tenebrarum in Latin—comprises the offices of matins and lauds traditionally sung or recited in the evening for the last three days of Holy Week, what we call the Sacred Triduum. In the Philippines, this office is called in its Spanish name, tinieblas, which has also lent its name, at least in some localities, to the large wooden clapper installed in the belfries of those times, more widely known as matracas, apparently because when the time of the customary noise was come, the belfry clapper was also sounded. The Choir chanted the tinieblas at the new chapel of the Parish of the Most Holy Redeemer in the Diocese of Cubao progressively later in the evening of Spy Wednesday, Maundy Thursday, and Good Friday.

As in 2015 and 2016, the tenebrario, what we call in Latin as the candelabrum triangulum and in English as the tenebrae hearse, holding fifteen sockets to support fifteen candles, and the Lectionarium tenebrale pro Tridui Sacri matutinis proper to the Choir, containing the notations of all the lessons sung during the Office, were used. These fifteen candles are progressively extinguished after each of the nine psalms of Matins and five psalms of Lauds. The six altar candles are put out after each double verse of the Benedictus. As the Office progresses, the chapel increasingly becomes darker and darker. At the end of the Offices, only the topmost candle on the tenebrario remains lit. 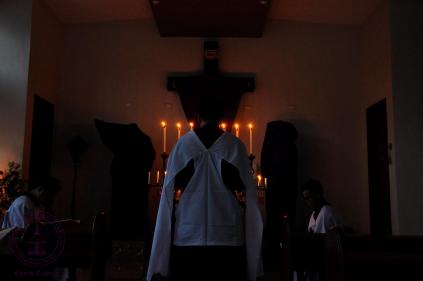