Today is the 41st anniversary of the Latinitas, founded on 30 June 1976 by Pope Paul VI through the chirograph Romani sermonis [1]. The Latinitas endeavours to support the study of the Latin language and letters, first and foremost the classical, then the Christian writings, as well as the Latin of the Middle Ages, and modern Latin; and to further the use of Latin in letter- and book-writing, especially in matters of worship in the Church and in Catholic studies.

The primacy of Latin in our liturgical life extends to how we reckon ourselves. (Where else should we begin?) Our choir is, therefore, named Cappella Gregoriana S. Cæciliæ olim Xicatunensis. In Latin. But, where is the choir here? In ecclesiastical Latin, the preferred term for choir as a group of singers dedicated to the Liturgy is cappella. In classical Latin, chorus is a dance, a ring dance, borrowed from Greek. When we see the term chorus in the rubrics (as is the case during Good Friday at the Reproaches), we have to understand that it is so written to distinguish it from the cantores. The cantores are the singers, usually one or two, appointed to lead the singing, while the chorus is the crowd of singers tasked to respond to the cantores. Chorus and cantores form the cappella. So, when we tune in to EWTN to watch the midnight Mass of Christmas in the Vatican, the choir that sings for that Mass is called in Latin as the Cappella Musica Pontificia Sixtina. 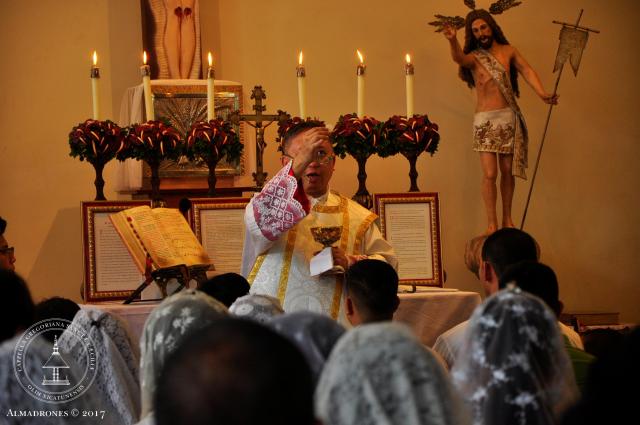 The term cappella originally referred to one of the many Frankish sanctuaries set up to house a relic of the cloak that Saint Martin of Tours gave to the beggar. Cappella is the diminutive of cappa, the Latin for cloak. In this sense, cappella descended into the Romance languages as the word of chapel: cappella in Italian, capilla in Spanish, capela in Portuguese, chapelle in French, capelă in Romanian, among others. In Latin, cappella both means choir (to a greater extent) and chapel (to a lesser extent). Chapel in Latin is also known as ædicula or sacellum, both diminutives, the former from ædis (shrine, temple, or building), the latter from sacer (holy). An ædicula is usually understood as a space within a bigger space. For this reason, the small building enclosing the tomb of the Lord inside the Church of the Holy Sepulchre is called Ædicula in Latin, or The Aedicule or The Edicule in English. Sacellum, on the other hand, is usually understood as a smaller version of a building otherwise built by norm as large. The Sistine Chapel, for example, is called in Latin as the Sacellum Sixtinum.

But, perhaps the most exciting activity of the Latinitas is the ‘creation’ of Latin terms for modern words and expressions.

Some of the neologisms raise eyebrows. A playboy is called iuvenis voluptarius. This means young man devoted to sensual enjoyment. Spot on! However, there are old men who claim to be playboys. Are we to call them senex voluptarius? Another intriguing neologism is lady: it is termed anglica mulier conspicua, which means distinguished Englishwoman. The rendition is good but does it really need to be bound to a nationality? But these are quite meek compared to the rendition of gentleman. It is rendered as integer vir. In English, this would literally mean untouched or whole man. Filipino minds would light up: lalaking buo? Imagine the ramifications of the buo and durog dimensions!