Today is Christmas Eve. Traditionally, before the misa de gallo, the Mass sung at midnight, the first Mass of Christmas, at prime, the proclamation of Christ, what many of us call kalendas, is sung as prologue to the martyrology. Amongst us Filipinos, members of some choirs that sang in the Mass before the liturgical changes of the 1960s would probably still remember singing or hearing the kalendas, which used to be sung as a choral rite of passage from tiple to cantor.

We know, of course, that, in a deplorable, but not unexpected, happenstance, the chronological exactitude of the old text of the prologue of the Christmas martyrology was thrown off the cliff and replaced with a generic formula that situates the birth of our Redeemer at a time, rather off-puttingly, “when ages beyond number had run their course”. It is no longer a mystery to us, but we still wonder why the usus recentior strives to countenance this inelegance and ambiguity.

For the usus antiquior, it is more common to use the older text. The elogium of the date is the same: the eighth calends of January. This means that 25 December is eight days away from 1 January, which is the calends of the month. The elogium of the moon changes per year, according to the epact of the year and its corresponding martyrology letter. This year, it is the seventh moon. Practically, especially if referencing the dates against the martyrology tables becomes too daunting a task to accomplish, we can simplify the reckoning by counting the number of days from the preceding new moon, which occurred on 18 December this year, until 25 December. 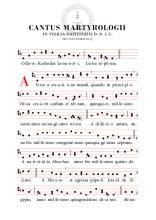 There is a modus ordinarius found in the Martyrologium Romanum, but here we have the modus sollemnior (click on the thumbnail to open the file), which is probably monastic in provenance. If it has fallen upon our happy lot to chant the kalendas this year, then we can exercise the option to sing it in the more solemn tone in honour of the holy birth of our Redeemer.

One thought on “Christmas proclamation 2017”