A century and a decade ago, when the feast of the Chair of Saint Peter was still kept on 18 January, the first octave, starting on said feast and ending on the feast of the Conversion of Saint Paul on 22 January, to promote and pray for the unity of Holy Mother Church, to bring all Her separated children back into union in Her bosom, was celebrated. In the English-speaking world, this new devotion, called at various times the Chair of Unity Octave and Church Unity Octave, authored by an Anglican who later became Catholic, Fr. Paul of Graymoor, quickly spread.

With the 1960 reform of the rubrics, when feasts judged as redundant—as though duplication nullified the graces obtained by their celebration—were suppressed from the general calendar, consigned to a patronising section of the Missal dubbed pro aliquibus locis, Holy Mother Church lost a feast that once provided a balancing emphasis to the one-sided Protestant preoccupation with Saint Paul, and the Church Unity Octave somehow lost a key chronological milestone upon which it was anchored in the duration of the liturgical year.

Weigh the anchor and the ship drifts to unknown waters. The octave slowly slipped into nondescript existence, gradually replaced by a slightly younger devotion established by the French priest, Fr. Paul Irénée Couturier, first as a triduum in 1933, then later as a week the following year, promoting unity amongst Christian confessions. It eventually gained the name Universelle Prière des Chrétiens pour l’Unité Chrétienne, in English Universal Week of Prayer for Christian Unity. The ecumenical atmosphere following Vatican II obviously offered a new ecosystem for this devotion, which the Church adopted beginning in 1966.

As usual, we need closure from the mention of this twist in the fabric of our time-honoured Catholic praxis. Approaching it is ultimately a choice between two lessons: on one hand, common wisdom advises that wine tastes better with age; on the other, medical observation informs that cancer metastasises over time. 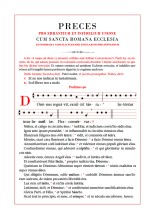 Leaving, therefore, this bitter juncture, we now approach the mandate set forth in decree 557 of the First Plenary Council of the Philippines. The decree specifically mentions the dates from 18 to 25 January, so we know that the Fathers envisioned a full octave of prayer, not a mere week. In view of this, we can use the original prayers approved for the Chair of Unity Octave, as printed here and here. Alternately, we can use a second set of rogational supplications (click on the thumbnail to access the file), or supplement them to the first set. Let us pray that everyone, those astray and the unbelievers, come to that true unity in the Catholic faith.

One thought on “For the unity of the Church”