Devotion to the Holy Face of the Lord is now widespread throughout the Catholic Church, broadly associated with the negative image of the Shroud of Turin, first obtained and developed by Secondo Pia unsuccessfully on 25 May 1898 and successfully three days later, which were initially received with scepticism. Using this image, the first Holy Face medal was coined in 1936, after Giuseppe Enrie’s photographs in 1932 corroborated Pia’s own work. Devotion, however, to the Holy Face, started way before the Turin photographs. An ancient manuscript missal in Saint Peter’s Basilica prints a collect ad faciem Christi. The more recent Missale Votivum Terræ Sanctæ, likewise, contains a full Mass that used to be celebrated in the sixth station of the Via Crucis.

France figures particularly in the establishment of this devotion, for in the missals and breviaries of many French dioceses—Périgueux, Meaux, Marseilles, to name a few—print in its entirety the pre-Leonine and pre-Pian proper Mass and Office of the Holy Face of the Lord. (In these aforesaid sees, the feast is kept on the Ember Friday of Lent, and is styled as the feast of Most Holy Face of Christ Disfigured in the Passion.) In fact, it was at the request of the archbishop of Tours that, on 1 October 1885, Leo XIII erected the Archconfraternity of the Holy Face of Jesus. This act awoke a great enthusiasm, supported and championed by bishops of sees where the archconfraternity established itself, that necessitated the decree, dated 16 February 1889, extending indulgences. Furthermore, it was to the see of Cambrai that, on 9 November 1908, Pius X authorised the Mass Humiliavit for the feast of the Holy Face. Later, in a decree on 13 July 1910, the Sacred Congregation of Rites approved the proper collects for the Mass, extended by decree to the Benedictine Sylvestrine Order on 15 March 1957, and to the Capuchins in the Sanctuary of the Holy Face in Manopello on 23 February 1963.

Today, certain places will be celebrating the feast of the Holy Face of the Lord. By God’s grace, we will be attending the Votive Mass of this feast in the presence of the relics of Saint Therese of the Child Jesus and the Holy Face. (Notice the connection: Holy Face, France, Saint Therese of Lisieux.) For this occasion, which in itself is as rare as 2018 having three blue moons, we prepared two pieces. 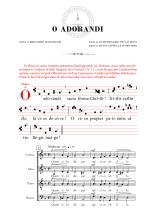 The first one harks back to the old Office of the French sees. Assigned to Vespers in this Office is the hymn O adorandi, written in the handsome Sapphic Adonic metre, which simply melts our heart. (Ut queant laxis, the first and sixth syllables of whose first three verses became the names of the notes of the mediaeval hexachord, is in Sapphic Adonic.) In this vein, O adorandi appears here in our chant setting (click the thumbnail to open the file), alternated with the melody of Iste Confessor from the Antiphonarium Pictaviense.

The second one we prepared owes its words from the seven-fold poem Rhythmica oratio in trochaic tetrameter ascribed either to Saint Bonaventure or to Saint Bernard of Clairvaux or to Arnulf of Leuven, which debuted centonised under the title Membra Iesu nostri patientis sanctissima (BuxWV 75) in 1680 in the hands of Dieterich Buxtehude. This poem is composed of seven parts, addressing each of the seven wounds of the Lord: first, on His feet; second, on His knees; third, on His hands; fourth, on His side; fifth, on His chest; sixth, on His heart; and seventh, on His face. This last part begins with Salve, caput cruentatum, which inspired first a German translation by Paul Gerhardt, O Haupt voll Blut und Wunden, to which Johann Crüger (publisher of the hymnal where the translation appeared) applied a simplified version of Hans Leo Hassler’s Mein G’müt ist mir verwirret, a confluence eventually arranged by Johann Sebastian Bach for the Passio Domini nostri Iesu Christi secundum Evangelistam Matthæum (BWV 244). James Waddel Alexander, a Presbyterian minister, translated the German into English as O Sacred Head, now wounded. Henry Williams Baker, Bart., an Anglican vicar, revised this by using the original Latin, and produced the more known (at least it is the translation used in the hymnal from which we sing this hymn) version O Sacred Head, surrounded.

But here (click the thumbnail to open the file) we used the Latin, set to music by Father Carlo Rossini, an Italian priest working in the diocese of Pittsburgh to implement the reforms of Pius X with respect to sacred music, upon invitation by the then bishop Hugh Boyle. This piece appears as hymn no. 75 in the 1935 Canticum novum. Two things to note on the as-is piece: first, it centonises the original, meaning only some verses were selected from the poem to form the lyrics of the current piece; second, the central solo part takes its words from the fourth part of the original poem, Salve, latus Salvatoris. Our version preserves the centonisation but replaces the central solo part with centoes from the seventh part of the original poem.

Shrove Tuesday received its name from the archaic English word shrive, which focuses on the activity of priests with respects to penitents (hearing confession, assignment of penance, and absolution).

We confess; the priest shrives. The word is thusly used. Let us, therefore, sanctify this day by being shriven.