The first time the Miserere was sung at the end of the Tenebrae was in the evening of Spy Wednesday, 7 April 1514. Paride de Grassi, ceremoneer of the Sistine Chapel, describes the new method as symphonizando, which we translated here as harmonising. However, the Latin gerund declined in the ablative, encodes a more specific meaning: the technique we now know as falsobordone. We might be led to believe that this technique creates an impression that a note or a chord is continuously sounded. And our perception is more or less correct. 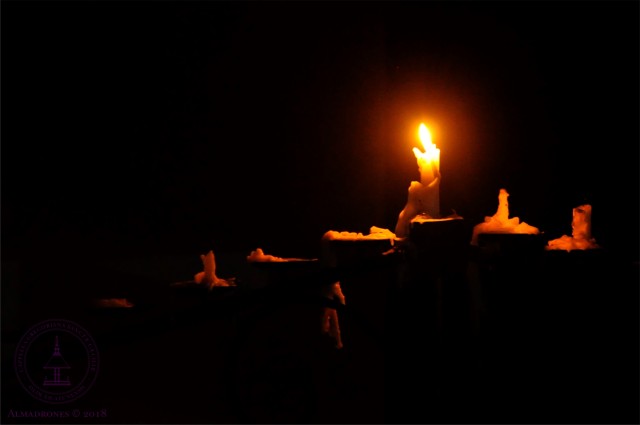 Different regions expressed this technique differently. The French cultivated fauxbourdon, where two voices are added below the melody. The English developed faburden, where the melody is sandwiched between two additional voices. The Spaniards employed fabordón, where voices are added to the melody akin to the French counterpart, a praxis criticised by some Spanish musical authorities as coarse and unschooled, as opposed to the more refined counterpoint. Italians, on the other hand, structured falsobordone in such a way that the first part is a recitation in one chord, and the latter part is a cadence.

In their first incarnations, these etymologically-related techniques, in their varied expressions and executions, were applied to liturgical singing, generally for chanting the psalms, harnessing the voice in such a way as to honour and render sublime the worship celebrated inside every consecrated edifice. In the Tenebrae, the Miserere, which is Psalm 50, is chanted every day as the first psalm of lauds. On Spy Wednesday, it is chanted in 8G; on Maundy Thursday, 7c; on Good Friday, 4c. It is not as the first psalm of lauds that the Mierere obtained its fame; it is as the final psalm before the collect that it did. In this position, the tone that presented naturally was the disarmingly haunting tonus peregrinus, sometimes ranked as the ninth tone of the Gregorian modes. In the Tenebrae, the tonus peregrinus is used mainly in the Lamentations, which are read in the first nocturn on all three days.

That first attempt to sing in falsobordone the Miserere unmasked its own nascent shortcomings. Experience of beauty is impermanent if the execution is not simultaneously attended by the so-called excellence of form and by holiness worthy of the liturgy, to borrow terminology from Tra le sollecitudini, if it is marred by an imbalance favouring technique rather intelligibility. The bitter failure kicked off, fortunately, a robust project, a fateful journey, a salutary pilgrimage, to seek after that composition worthy of occupying a lofty niche in the stratosphere of sacromusical achievements. We can say that Allegri’s Miserere is a very important milestone, if not the most fitting culmination, of that pilgrimage.