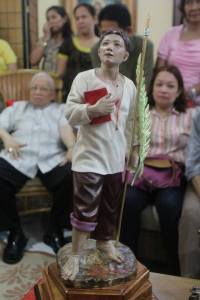 Saint Pedro Calungsod died on 2 April 1672. If we check the liturgical calendar for the year 1672, we will find out that 2 April 1672 is the Saturday before Passion Sunday. Passion Sunday, in the reckoning of the Hispanic world, is domingo de Lázaro, a term we Hispanics appropriated from the Mozarabic Rite, which calls the Fifth Sunday of Lent exactly that way, Dominica de Lazaro (something which also persists in the Ambrosian Rite). This birthday almost always falls either within Lent or during the Easter Octave. As such, it is accordingly transferred. If we following the rule of thumb in the Extraordinary Form, we will be transferring the feast to the first unimpeded day after Low Sunday. In the Ordinary Form, however, the memorial of Saint Pedro Calungsod observed today, having been made transferable to the Saturday before Palm Sunday, for praiseworthy reasons slightly marred by a notional shift.

This translation of the memorial of Saint Pedro Calungsod obtains its force, or at least it is enshrined, in a 2013 circular of the Archdiocesan Liturgical Commission of Manila. In this circular, the memorial, when 2 April is impeded, is transferred to the Saturday before Palm Sunday. The intention, in its pure form, is very honourable. To celebrate our second saint on the liturgical day he died is indeed laudable. The aftereffects, however, of the liturgical reforms in the past forty years, which unsurprisingly allotted considerable effort towards restructuring terminology, a semantic reform, if the term pleases, have unfortunately conflated Palm Sunday with Passion Sunday in present liturgical thought.

When the decision to transfer the memorial of Saint Pedro Calungsod was being deliberated, it seems that this notional shift was not taken into account. And so, in 2013, Filipinos were advised to transfer the memorial to the Saturday before Palm Sunday. Or perhaps this was ignored, being obviously outdated and latently dangerous in the established worldview, because we have to get on with the times. Either way, knowing that this is the tip of a bigger question, let us ask Saint Pedro Calungsod to intercede for us, that we may endure with forbearance the vicissitudes of the world to which we are consigned, and grant us the same youthful fortitude that enabled him to submit to martyrdom.